It means Bright city and its construction starts in year 936 by Abderramán III, as a symbol of the begining of the caliphate.
Located in the foothills of the Sierra Morena, 8 kilometers west of Cordoba, its design takes advantage of the uneven terrain distributed on three terraces, with a rectangular layout different from the traditional chaotic distribution of Muslim urbanism.
There are many references written to the majesty of the route made by monarchs and ambassadors who came from everywhere.
Its monumentality and artistic splendor even in the smallest details, became it as the most beautiful city of the West.
However, this splendor went out in just half a century, since in 1010 it was completely destroyed and looted, as a result of the civil war that ended the Caliphate of Cordoba. 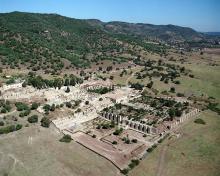