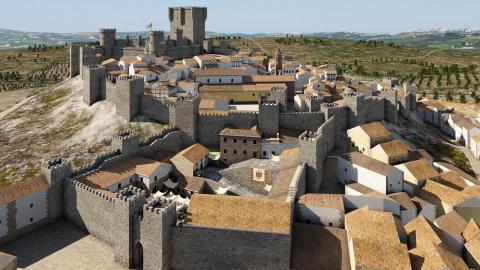 Tweet
iOS / Android. If app not installed, leads to store:
Discover it within the VirTimePlace app
VTP ID:
8
Mecenas rating:
0
No votes yet

The hill of Aguilar features the best natural resources for human settlements over history, which were documented, from the Lower Paleolithic. Its access to water courses, fertile lands and its elevation over the countryside, make it a model of fortified settlement which has been repeated frequently in the Iberian Peninsula. This model shows us, since Neolithic, an organized society that began to domesticate animals and cultivate plants, laying the foundations of a permanent camp, with abundant silos, on the slope of the hill, at least, from the third millennium BC. This camp and its defensive advantage, would be the focus that would lead to a fortified city. With the arrival of the Romans, Ipagro became the watch site for a strategic crossroads; the union of the guadajoz valley with the Sevillian countryside and the Corduba-Malaka route from southeast to northwest, which reinforced, even more, its defensive aspect. Already in the ninth century, there is evidence of the castle used by Omar Ibn as a stronghold to attack Cordoba, and since then, will undergo various modifications and additions. Among its known features, the main square and 3 towers, built by Gonzalo Fernández de Córdoba, at the end of the 15th century. Its tribute tower, with walls 5 meters thick and ribbed vaults, was the most noble space, reserved for audiences. Finally, on the outside, a barrier surrounds the castle, facing a moat. Is called Falsabraga and it has embrasures, with a liza of 3 meters and a very elaborated design in front of the artillery. Documentation and supervision: Technical team of Aguilar City Council