Villa Adriana was a complex with more than 30 buildings that occupied at least one square kilometer next to the city of Tibur, now Tivoli.

It contains the largest Alexandrian garden in the Roman world, recreating a small city with palaces, fountains, baths, libraries, theater, temples and rooms for official ceremonies.

It was built by Adriano, in the second century, as a place of retreat, and was later used by his successors, being the greatest demonstration about the wealthness of the emperor, which is easy to imagine touring the pool and canopus, where they are still preserved some of the fine statues of Greek inspiration. 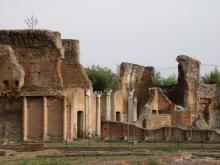